New Zealanders voting on whether to change flag 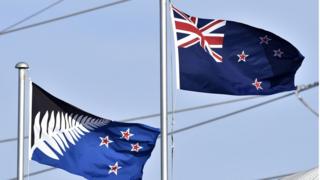 People in New Zealand have started voting on whether to change their national flag.

The country's prime minister wants to change to a design so that it looks different to the UK flag.

The current flag includes the Union flag - the United Kingdom's national flag, from a time when the country was controlled by the UK.

Voters are being asked to choose between the current design and a new flag based around the traditional New Zealand silver fern.

People have three weeks to vote.