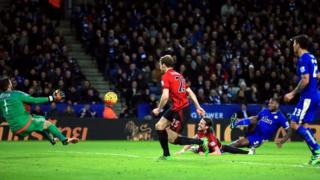 Leicester missed the chance to go five points clear at the top of the Premier League as West Brom came from behind to claim a thrilling draw.

Salomon Rondon gave West Brom the lead early in the match, but a Danny Drinkwater deflected shot levelled it.

Andy King finished a wonderful move to put Leicester ahead only for Craig Gardner to equalise with a free-kick.

Leicester twice hit the bar at a loud King Power Stadium, but could not find a winner.

"It's another point on the way for us. It's important for us to get to 40 points and we are happy with the way things are going," said West Brom manager Tony Pulis.

"We need the hunger and desire to get to 40 points. We should have kept the ball better tonight. I'm really pleased with the players though," he added. 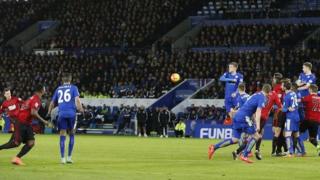 The draw leaves the Foxes three points ahead of Tottenham, who can go top with victory at West Ham on Wednesday, and six ahead of Arsenal, who face Swansea.

West Brom, who have now lost only two of their past 10 league games, stay 13th - 12 points clear of the relegation zone.