More than 70 doctors and academics are calling for a ban on tackling in rugby matches played in UK and Irish schools.

In a letter, they say injuries from this "high-impact collision sport" can have lifelong health effects for children.

They argue that the majority of injuries in youth rugby are down to tackles and they want schools to move to touch and non-contact rugby.

But, in their letter to politicians, chief medical officers and children's commissioners in England, Scotland, Wales, Northern Ireland and the Republic of Ireland, doctors say the risks for players aged under 18 are high.

They say many secondary schools in the UK offer contact rugby as part of physical education from the age of 11.

"The majority of all injuries occur during contact or collision, such as the tackle and the scrum," the letter says.

"These injuries, which include fractures, ligamentous tears, dislocated shoulders, spinal injuries and head injuries can have short-term, lifelong and life-ending consequences for children."

The letter says concussion is also a common injury to children playing rugby.

What is a concussion? 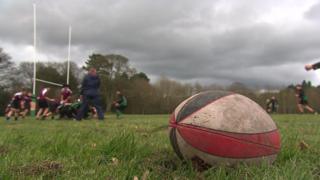 Concussion is a common sporting injury.

In many sports, where there is a lot of physical contact between players, there is a risk of hitting your head.

The impact of knocking your head can cause the brain to bump against the bone of the skull. It is this bump that causes concussion.

Concussion is most common in boxing, skiing, rugby and football.

Symptoms include: loss of consciousness, confusion, headaches, vomiting and feeling unsteady on your legs.

The Rugby Football Union, who run the sport of rugby union in England, said it took player safety "extremely seriously" and it was currently carrying out an injury prevention project in schools.

A spokeswoman added: "Rugby is great for children, it makes them more confident and they learn discipline, keeping rules when playing as part of a team and respecting teams they play against. Teachers say children's behaviour often improves when they play rugby." 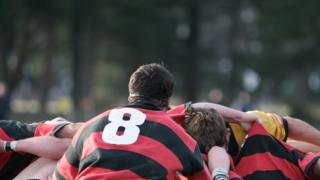 "Rugby for young people isn't the same as the international rugby on TV and special rules for young players make the sport as safe as possible. Young players learn things like tackling and the scrum very gradually and players, teachers and coaches have lots of time to learn safe techniques."

"What the Rugby Football Union wants is youngsters to play with their team mates and have fun," the spokeswoman added.