Farting fish could be cause for ocean 'buzzing' noises 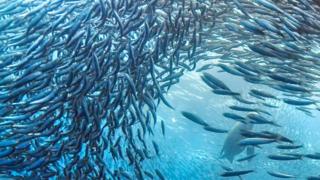 You might think that the middle of the Pacific Ocean would be a fairly quiet place but a loud hum or buzz coming from under the water has been puzzling scientists for years.

Now they think they've figured out why it is - it could be down to fish giving out gas. A US team from the University of California, San Diego, listened to the buzz through microphones dropped down as far as 3,300 feet underwater.

They found out that the noise was particularly strong at sunset and dawn.

Scientists think the buzz comes from large groups of small fish and crustaceans that hide in the deep water during the day, and rise up nearer the surface to feed at night.

Simone Baumann-Pickering , a marine expert who worked on the study, says "it's known that some fish are considered to be farting, that they emit gas as they change depths in the water column.

"We're just scratching the surface in terms of understanding how important sound is."

The fish could be making the noise when they let off gas from their bladders to keep them bouncy. Or it could be that they are communicating with each other using the buzzing.

Fish may have longer memory than thought