Pokemon is 20: You tell us what your favourite video game is 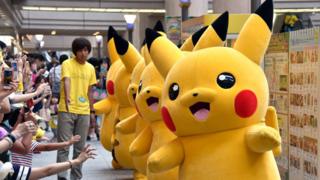 The game was launched by a Japanese company back in 1996, and it grew to be one of the most successful video games of all time.

The series started as a black and white game on a hand held device called a gameboy, but led to dozens of sequels and spin-offs, as well as films and TV shows, and masses of merchandise.

We want to know why you think Pokemon is so successful, and how it compares to your other favourite games.

Pokemon is my favourite game ever, next to the Professor Layton series. I have played almost all the games and I hope they bring out a new one soon.

I've never been a fan of Pokemon, I'm more for Treyarch and Activision games.

Pokemon has stayed so popular because it has strategy so you need to think. That's why it's so popular even today.

I prefer older games like Mario Kart WII and Mario and Sonic at The London 2012 Olympic Games.

My favourite video game is Pokemon and Pikachu. I have no idea why Pokemon has stayed popular for a long time, however I do like the newer games.

Pokemon always has and always will be my favourite video game!

Pokemon is a great game. It is great and I am not surprised it is still up 😄😄😄