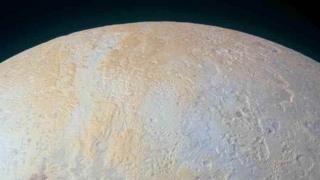 Pluto is 3.26 billion miles away from Earth and the New Horizons space probe has been sending back detailed photos of its surface since a historic fly-by in 2015.

Canyons are deep holes in the surface of a planet. Some of them are thought to be created when ice on the surface has melted, causing the ground to collapse.

The biggest one is about 46 miles wide and others appear to be about 6 miles wide.