A five-year-old football fan in Afghanistan has been given a brand new football shirt signed by his hero Lionel Messi, after a photo of him posted online went viral.

Murtaza Ahmadi got known as 'Messi's biggest fan' after the photo of him wearing an Argentina shirt that he'd made out of a blue-striped plastic bag was shared online.

People were so impressed by his homemade shirt that a search was made to find him. 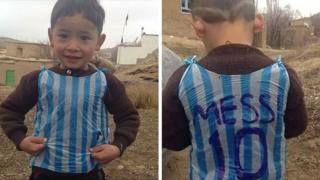 Messi's management team confirmed on Thursday that Murtaza has been sent a signed Argentina shirt and football from the Barcelona forward.

Murtaza was very happy with the gift, saying "I love Messi and my shirt says Messi loves me".

Messi also sent extra shirts for Murtaza's family, including his oldest brother who shared the original photo on Facebook.

Young footy fans react to the cost of football shirts