Sea sponges could have been Earth's first animal 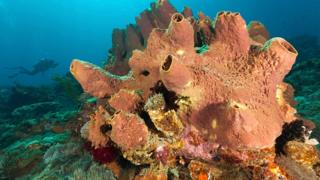 They might not look too lively, but sea sponges are animals, and may have been the very first animals to live on Earth.

Life on Earth is thought to have began about 3.8 billion years ago, with very simple cells and bacteria. It took about a billion years for that to evolve into the kind of life forms we know now, like animals.

In the past, scientists have found lots of animal fossils from a time called the Cambrian period, around 540 million years ago.

Now, a team at the Massachusetts Institute of Technology in America say that they've found evidence that sea sponges could date back even earlier - to over 640 million years ago. If proven, this would make sponges the oldest animal of all.