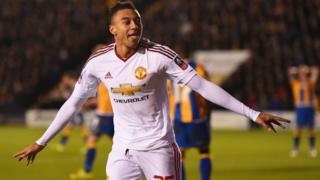 Manchester United are through to the quarter-finals of the FA Cup after beating League One side Shrewsbury 3-0.

The win means that United will now face West Ham in the next round of the competition.

Louis van Gaal said he was pleased with his team's performance but was already looking ahead to their Europa League game on Thursday against FC Midtjylland.