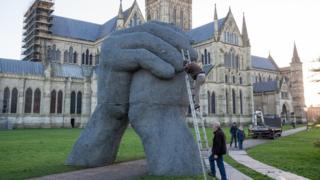 A statue outside Salisbury Cathedral has had to be moved from a pathway after people texting on their mobile phones kept bumping their heads on it.

The massive model, called "The Kiss", is of two giant hands clasped together, with a gap nearly two meters high for people to walk underneath.

But just one day after it was installed it had already caused sore heads for several people who were concentrating so hard on their mobile phones that they didn't notice where they were going.

It's not the first time that "text walking" has been a problem - in Belgium, one city even installed "text walking lanes" to stop phone-users from bumping into other people.

Now, officials have moved "The Kiss" statue to a new spot where they're hoping it'll cause fewer accidents!