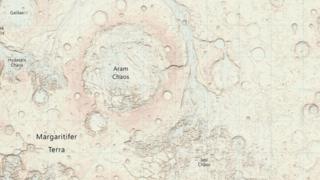 Ordnance Survey
Part of the map of Mars

Ever wondered how you'd find your way around Mars if you were there? Well a brand new map of the red planet's been made which might just help...

Mapping agency Ordnance Survey - who usually make maps of the UK - have now made one of Mars, using information from Nasa and showing in detail how high and low different parts of the ground are there.

A special version's been given to a British scientist helping to plan the landing of a rover on Mars in 2019.

The map covers roughly 3.8 million square miles of the planet - that's about a tenth of the total Martian surface.

Chris Wesson, one of the people who made the map, says he could imagine a future astronaut using a copy of the map when exploring Mars.

"You have these large areas that looked flat but they're actually really rocky and uneven surfaces - that was the most difficult bit of the map, to try to show that but put it in proportion to these huge craters," he said.

How to see the planets align