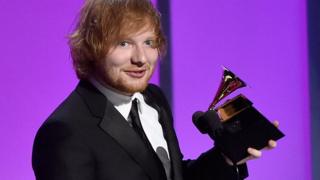 Taylor Swift and Ed Sheeran were some of the big winners at the Grammy music awards last night in Los Angeles, America.

Ed Sheeran won his first two Grammys for song of the year and best pop solo performance for Thinking Out Loud.

Mark Ronson and Bruno Mars won two awards for Uptown Funk including record of the year.