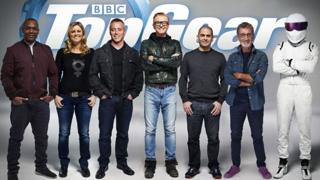 They will join DJ Chris Evans and actor Matt LeBlanc when the BBC Two programme returns in May.

The new presenters were signed after Jeremy Clarkson, James May and Richard Hammond left the programme last year.

Speaking about her new role, Schmitz said "The chance to combine both driving and filming was too good an opportunity to pass up".

"I've appeared on Top Gear a few times in the past, so I know we're going to have a lot of fun," she added.