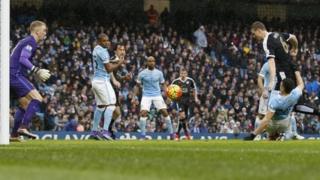 Premier League leaders Leicester stunned rivals Manchester City with a convincing victory at Etihad Stadium to move five points clear at the top of the table.

Robert Huth met Riyad Mahrez's free-kick to give the Foxes an early lead.

Mahrez made it 2-0 with a step-over and finish, and Huth found space to head home a corner before Sergio Aguero's pulled a goal back for Manchester City.

The Foxes have now picked up 28 points away from home this season.

Leicester will head for the Emirates next week and another test of their title hopes against Arsenal.

Manchester City must pick themselves up for the visit of another in-form team, Tottenham, before starting a run of fixtures that sees them play in the FA Cup, Champions League and the Capital One Cup final in the space of a week.

Tottenham 1-0 Watford: Tottenham moved into second place in the Premier League table as Kieran Trippier's first goal for the club sealed a dominant win over Watford.

Liverpool 2-2 Sunderland: Thousands of Liverpool fans walked out of Anfield in protest at ticket prices as struggling Sunderland came from 2-0 behind to secure an important point.

Aston Villa 2-0 Norwich: Aston Villa moved to within eight points of Premier League safety with their third win of the season as Norwich slipped into the bottom three.

Stoke 0-3 Everton: Everton moved up to seventh place after beating Stoke, who suffered a third Premier League defeat in a row.

Newcastle 1-0 West Brom: Newcastle produced one of their best displays of the season as they beat West Brom to move out of the Premier League bottom three.

Southampton 1-0 West Ham: Southampton earned their fourth win in five matches, despite a third red card of the season for midfielder Victor Wanyama.

Swansea 1-1 Crystal Palace: Crystal Palace stopped a run of five straight defeats thanks to Scott Dann's fifth goal of the season as Swansea slipped to four points above the Premier League relegation zone.