A massive earthquake has toppled buildings and caused huge damage in Taiwan, an island off the coast of China.

Rescue teams have been working throughout the night, helping hundreds of people who live there.

The earthquake struck close to the southern city of Tainan in the early hours of the morning. 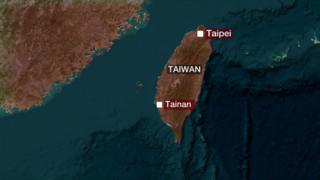 The earthquake hit the city of Tainan, in the south of the small island

It's an area where earthquakes often happen, but they aren't usually so big.

Firefighters, police and the army are all working together to rescue people, and animals, from the rubble.

Shelters are being set up for people whose homes have been badly damaged. There are power cuts and public transport has been stopped.

Exactly how much damage has been done is still not known, but rescuers continue to work hard to make people safe.

Advice if you're upset by the news.