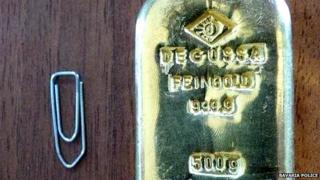 Bavaria police
The gold bar weighs half a kilogram

Back in August a 16 year old girl found a gold bar while she was swimming in a lake in Germany and now she gets to keep it.

The teenager found the gold bar, worth over £13,500, two metres under water in Lake Koenigssee.

Police said that as nobody had come forward in six months to claim the gold that the finder gets to keep it.

The gold was found in Lake Koenigssee in an area called Bavaria in south East Germany near the border with Austria. 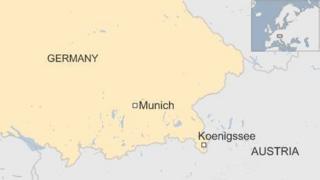 At the time police divers checked the area for more gold but didn't find anything.

Following an investigation, nothing else is known about where it came from. 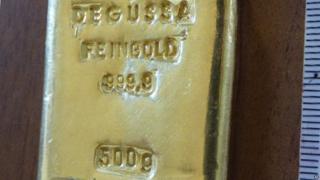 AP
Special marks might help identify where it came from

The gold bar has distinctive markings which show the weight of the bar and how pure the gold is.

This has helped experts work out that the gold bar is worth a whopping £11,500.