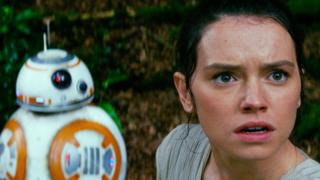 Star Wars: The Force Awakens has taken home the most trophies at the Visual Effects Society Awards in Los Angeles, America.

The film won four prizes, including the top honour for outstanding visual effects in a live-action feature.

In animations, The Good Dinosaur did the best, with three awards.

Star Wars: The Force Awakens is also nominated for its visual effects at the Oscars, which take place at the end of February.

Obama is a "rebel" like Star Wars' Han Solo