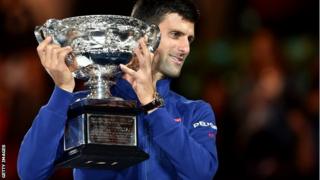 World number one Novak Djokovic beat Andy Murray in straight sets to win his sixth Australian Open title, beating the Brit in the final for the fifth time.

Second seed Murray, 28, has now lost all five Australian Open finals he has played, four of them against Djokovic.

The Scot becomes only the second man - behind his former coach Ivan Lendl at the US Open - to lose five finals at the same Grand Slam since the open era began in 1968.

He was expected to head straight to the airport after the final to return to London and his wife Kim, who is due to give birth to their first child in the next two weeks.

Djokovic has now won four of the past five major tournaments, including three in a row, and will try to complete his career Grand Slam with a first French Open title in June.

Murray: "I feel like I've been here before. Congrats Novak. Six Australian Opens is an incredible feat. The last year has been incredible. Good job.

"I'd like to thank my team for getting me to this position. Sorry I couldn't get it done. Thanks for all your support during a tough few weeks off court.

"And finally to Kim, my wife, who is going to be watching at home. You've been a legend. I'll be on the next flight home."

Djokovic: "I need to pay respect to Andy for having another great tournament. Tough luck tonight.

"He's a great champion, great friend and a great professional who I'm sure will have many more chances to win this trophy.

"I also wish you and Kim good luck for the birth of your child and I hope you will experience a feeling like no other before - that's what happened to me and my wife. I wish you all the best."