He has been broadcasting on television and radio for more than 50 years and was also the voice of the Eurovision Song Contest for many years.

He passed away surrounded by his family. 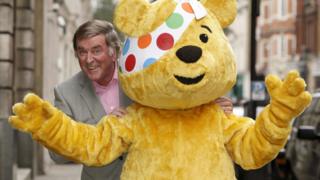 PA
Children in Need has raised millions to change the lives of young people in the UK.

Lots of people have paid tributes to Sir Terry:

BBC Radio 2 controller Bob Shennan said: "Terry established himself as one of the greatest and most popular radio hosts this country has ever heard. "

Prime Minister, David Cameron said: "My thoughts are with Terry Wogan's family. Britain has lost a huge talent - someone millions came to feel was their own special friend.

"I grew up listening to him on the radio and watching him on TV. His charm and wit always made me smile."

Sir Terry Wogan and BBC Children in Need: In pictures