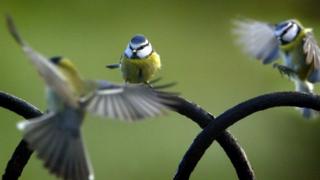 PA
The survey will monitor birds including the blue tit

More than half a million people are expected to take part in an annual UK birdwatch this weekend and record species spotted in gardens and parks.

The RSPB Big Garden Birdwatch tracks species like starlings and song thrushes, which have declined by 80% and 70% since the survey began in 1979.

The unusual weather this winter could affect which birds are seen in gardens.

The RSPB said it was likely there would be fewer birds because they have been less reliant on garden feeders.

December was the warmest and wettest month in the UK in more than 100 years, before a cold snap was followed by warmth in January.

The RSPB said it would be interesting to see how this had affected the long tailed tit, which is badly affected by harsh winters, and if there were lower numbers of species from the continent, including finches and blackbirds.

RSPB wildlife adviser Ben Andrew said: "If the UK experiences a continuation of these milder temperatures, those taking part in Big Garden Birdwatch may notice their gardens quieter than in other years.

"The milder weather means there is more food available in the wider countryside, with birds being less reliant on garden feeders."

However, Mr Andrew added it was still important to keep garden feeders stocked so that birds could find food whatever the weather.

The birdwatch, which takes place over the next two days, encourages people to spend at least an hour spotting birds and then report their sightings to the RSPB.

This lets them to learn more about changes in numbers.

Are vultures the new drones?