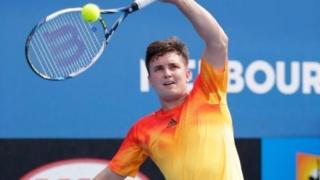 Getty Images
Reid is current ranked fifth in the world

Gordon Reid has won his first Grand Slam singles title by beating Joachim Gerard 7-6 (9-7) 6-4 in the wheelchair final at the Australian Open.

Gordon will hope to add the doubles title when he plays the final alongside his Japanese partner Shingo Kunieda later on Saturday in Melbourne.

The Scot said: "It's amazing to showcase our sport and I want to thank everyone."

Reid had earlier knocked out his doubles partner Kunieda, who had won eight out of the nine previous Australian Open titles.