Storm Gertrude is bringing chaos to parts of Scotland, Northern Ireland and England.

Schools are shut, homes are without power, trains and ferries have been cancelled and bridges have been closed in areas of Scotland. 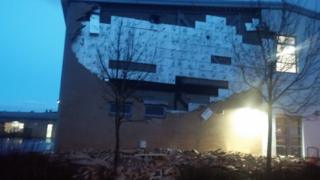 Scott Arthur
High winds brought down part of the wall at a primary school in Edinburgh, in Scotland.

A rare red warning, which means danger to life, has been issued for Shetland in the north of the country. 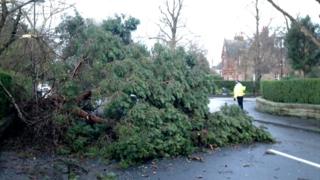 In Northern Ireland the wild weather has brought down trees and power lines.

Lee James Rowden
Waves have battered the shoreline in Oban, in the north of Scotland 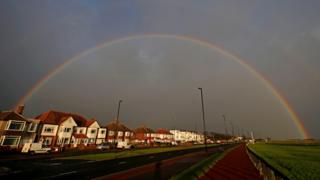 PA
Storm Gertrude brings dark skies and a rainbow to Whitley Bay on the north east coast of England.

The Scottish Environment Protection Agency (Sepa) has issued more than 40 flood warnings for areas across Scotland.

US snow storm in pictures