Liverpool through to the Capital One Cup final after penalties 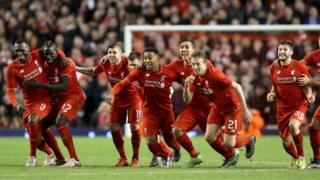 Liverpool won a penalty shootout 6-5 against Stoke City at Anfield to reach the Capital One Cup final.

Stoke had won 1-0 in normal time with Marko Arnautovic scoring to level Liverpool's one-goal advantage from the first leg.

This took the match into extra-time and then penalties.

Liverpool will play either Manchester City or neighbours Everton at Wembley in the final on 28 February.

Liverpool through to league cup semi-finals

League Cup: Third round results and Fourth round draw