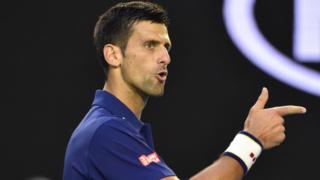 World number one Novak Djokovic will play Roger Federer in the men's semi-final at the Australian Open.

He admitted after the match that he hadn't practiced before his match because he'd played five sets against Gilles Simon.

"I was determined, focused. In important points and moments I managed to stay composed and make him play an extra shot," he said.

How do you play ping-pong in space?