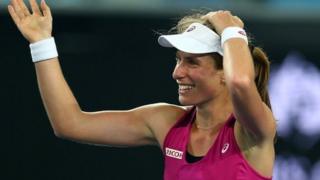 Johanna Konta has become the first British woman to reach a Grand Slam quarter-final for 31 years, after beating Ekaterina Makarova at the Australian Open.

"It was mentally, emotionally and physically draining," Konta said.

Her next opponent will either be 15th seed Madison Keys, or China's Shuai Zhang.

The 'Grand Slam' tournaments are the four most important annual tennis competitions. Players travel from around the world to take part in them.

They include the Australian Open, US Open, Roland Garros, and Wimbledon.

The last British woman to play in the quarter-finals of a Grand Slam was Jo Durie, at Wimbledon in 1984.

Federer through to final 16 at Australian Open

Konta and Murray through to third round of Australian Open

Nadal loses in first round of Australian Open