US east coast begins clean up after huge snow storm

People on the east coast of the US are starting to clear up after a massive snow storm.

The huge blizzard has left more than a metre of snow in some places and caused chaos across several cities.

Many schools are closed today. In New York a record 67 centimetres of snow fell in the city's famous central park. 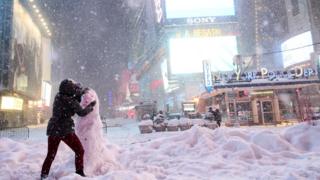 Getty Images
A woman decorates a snowman in Times Square as all cars but emergency services were banned from driving on the road in New York City.

More than four thousand flights were cancelled and airports were closed across the region.

US kids have been sending us special reports on the storm.

Transport was suspended as snowploughs struggled to clear streets, and parked cars were left buried under snow. The transport ban has now been lifted in New York but in Washington DC, the metro is set to remain closed. 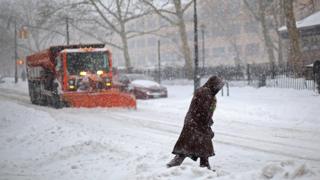 Getty Images
A woman crosses the street in front of a snow plow in the Brooklyn in New York City. Some people have died and there has been a lot of car accidents.

It's thought 29 people have died because of the weather so far.

Weather forecasters say the blizzard is weakening as it heads out towards the Atlantic Ocean. 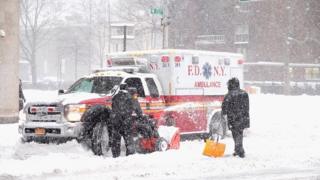 Getty Images
An ambulance gets stuck in the snow in Chelsea during blizzard condition in New York. Over a foot of snow fell in the city in 24 hours. 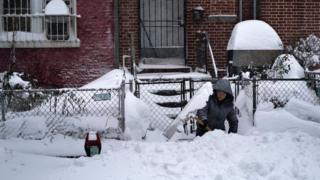 Getty Images
A lady shovels a pavement after a snowstorm in Washington, DC. 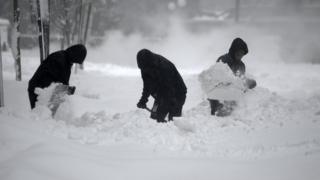 Getty Images
Workers clear snow from a pavement in Washington DC in the US as millions of people were told to stay indoors. 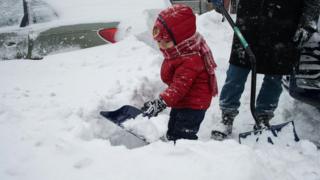 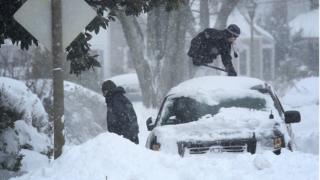 Getty Images
People clear snow from their car in Arlington, Virginia in America.

Kids in Washington report on US snow storm