American astronomers say they have found strong evidence that a ninth planet might exist in our solar system.

No-one has actually seen the planet yet, but scientists believe that it almost definitely exists, because they can see other objects in space being affected by it.

Here are nine things we know about the mysterious 'Planet Nine':

Scientists think that Planet Nine is 10 times bigger than our own planet Earth.

Of all the planets in our solar system, we used to think that Neptune was the furthest away. But now it looks like Planet Nine could be 20 times further away than Neptune!

3. It takes a really long time to orbit

Because it is so far from the sun, Planet Nine has a really long orbit. Every loop it does around the Sun takes between 10,000 and 20,000 years.

4. It affects other objects in space

Scientists could tell that Planet Nine existed, because it's gravity was affecting rocky objects in space which circle around the planet Neptune.

5. It could be the 'Real' Ninth Planet 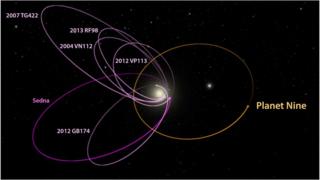 Planet Nine could be the 'real' ninth planet - scientists used to think that Pluto was the ninth planet in our solar system, until they downgraded it to a 'dwarf planet' ten years ago.

6. It changes what we know about the solar system

The discovery of Planet Nine is the first time in 150 years that scientists have had solid evidence that there are more planets in our solar system than we already knew about.

This could change scientists' understanding of how the whole solar system was made.

7. People have wondered if the planet exists for a long time

Although there hasn't ever been evidence this strong before, people have wondered about an ninth planet for centuries.

Some people, including UFO enthusiasts have even written about a mythical 'Planet X'.

Although they can't be sure until the planet it actually found, scientists say that the evidence is really strong, and there's only a 0.007% chance (about one in 15,000) that the ninth planet doesn't exist.

Until scientists actually see the planet, they can't confirm its existence for sure.

The scientist who claims to have found evidence for Planet Nine, Dr Mike Brown, says that there are many telescopes on Earth that could be good enough to see it.

He said that he hopes the announcement will encourage astronomers around the world to get involved in the search.