Bolton moved on to the fourth round of the FA Cup after beating non-league Eastleigh 3-2.

The Championship's bottom club fell behind to a super Joe Partington goal. Gary Madine levelled before Dean Moxey put the hosts ahead with a strike from the edge of the box. 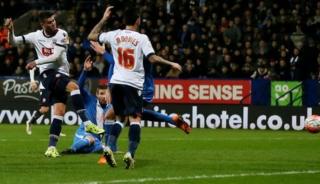 Bolton will now host Leeds United in round four at the end of the month.

Bristol City 0-1 West Bromwich Albion: Salomon Rondon scored the only goal as West Brom overcame a stubborn Bristol City at the second time of asking to reach the FA Cup fourth round.

MK Dons 3-0 Northampton: MK Dons will host Chelsea in the fourth round of the FA Cup after the Championship side comfortably beat League Two Northampton in their replay.

Yeovil 1-1 Carlisle: Carlisle will host Everton in the FA Cup fourth round after beating League Two rivals Yeovil on penalties.

Reading 5-2 Huddersfield: Matej Vydra scored a hat-trick as Reading fought from two goals down to defeat 10-man Huddersfield Town and reach the FA Cup fourth round.