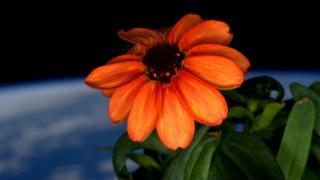 AFP
The zinnia flower is the first to grow in space

Astronauts have grown the first flower in space on-board the International Space Station.

The orange zinnia flowers can be eaten and were grown in the 'Veggie' laboratory, which was installed on the space station in 2014.

Growing their own food in space is a big step for astronauts because it means they could go on longer missions in the future.

They've grown lettuce before but the zinnia is the first to bloom flowers.

It shows that it may be possible to grow other flowering crops like tomatoes. 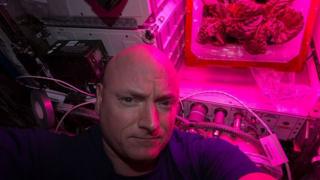 Growing plants in space might be trickier than you think - watering flowers is much more difficult in a place without gravity!

Another problem was that the high levels of moisture in the air inside the space station led to mould growing on some leaves.

The astronauts cleaned the plants, cut away the mouldy leaves, and set up a fan to try and dry out the crop. But the high speed fan did its job a bit too well, and the plants got too dry.

Astronaut Scott Kelly took charge of the flowers, and worked hard to revive them over Christmas, and on 12 January, a few petals started to peak out.

When the flowers finally bloomed, Scott shared the photo saying 'first ever flower grown in space makes its debut!'