Obama is a "rebel" like Star Wars' Han Solo 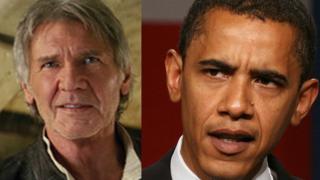 AP
Obama thinks he's a bit of a rebel, like Han Solo.

US president Barack Obama has said that the Star Wars character he'd most like to be is Han Solo.

When asked in an interview which character he'd pick, he said: "I gotta go with Han Solo, he is a little bit of a rebel".

He admitted that he hadn't seen the new Star Wars film, but said that his favourite of the series was the very first film.

The president was interviewed by three YouTube vloggers on Friday.

He also gave his opinion on how should a dog wear trousers, the debate that has divided the internet.

Obama thought that they'd just wear them on two legs, saying that there was "too much fabric" on the four legged option.