Eastenders' Peggy to quit the soap for good 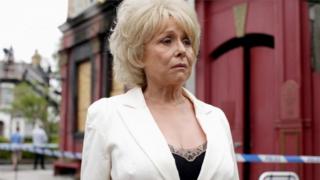 Peggy will say her goodbyes in the spring.

EastEnders actress Dame Barbara Windsor says she is leaving the show for good.

She revealed that her character, Peggy Mitchell, will die.

Dame Barbara said: "Peggy is a character close to my heart but I made the decision a while ago that I need to say goodbye to her once and for all".

She played the character full-time until 2010 and has since returned several times to the soap.

Her final scenes will air in the spring.