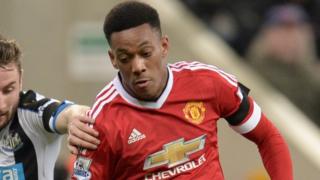 Manchester United striker Anthony Martial has been named as one of the fastest Premier League players this season.

Although Martial didn't score in a 3-3 draw with Newcastle on Tuesday he did clock an incredible speed of 22 miles per hour in a five second sprint across the pitch.

The French footballer has impressed United fans since he moved to the side in summer 2015.

What could England's national anthem be?