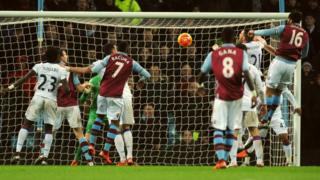 AP, Rui Vieira
Lescott's header scored the only goal of the match

Crystal Palace goalkeeper Wayne Hennessey allowed Joleon Lescott's header to squirm from his grasp and trickle over the line.

It was their first win under manager Rémi Garde and only their second win of the season.

Crystal Palace's manager, Alan Pardew, said it was one of their poorest displays of the season.