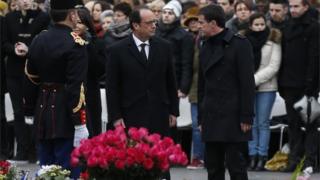 A ceremony has taken place in central Paris, France to remember those killed in the Charlie Hebdo attacks a year ago.

French President Francois Hollande laid a wreath in the Place de la Republique, where a special oak tree was unveiled, and a minute's silence was held.

17 people in total lost their lives during the horrific attacks - 12 people at the office of the Charlie Hebdo magazine, four hostages at a Jewish supermarket and a policewoman.

Those protests centred on the Place de la Republique and Sunday's ceremony remembered that show of unity, which attracted more than a million people.

Relatives of some of the victims also attended Sunday's event, which marked the end of a week of ceremonies remembering the attacks.

If you're upset by anything you hear in the news, click here to get some advice to help.

France is still under a state of emergency following more attacks in Paris on 13 November, which killed 130 people.

The extremist Islamic group known as IS, or the Islamic State, said they were responsible for the attacks.

A plaque unveiled in the Place de la Republique pays tribute to victims of both the Charlie Hebdo and November attacks.