FA Cup: All the results from Saturday's FA Cup matches 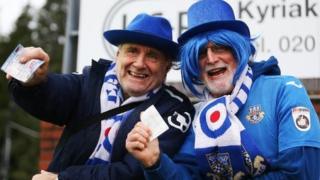 Eastleigh almost produced a memorable FA Cup third-round shock as the National League side - the only non-league team still in the competition - were stopped by a late equaliser from Championship Bolton.

Bristol City, struggling in the Championship, came even closer to an upset - an injury-time equaliser for Premier League West Brom made sure that tie also went to a replay.

But what else happened across Saturday's 26 matches? Here is Newsround's FA Cup round-up.

The visitors took a surprise lead when Jeremain Lens struck inside the box.

Substitute Aaron Ramsey tapped in late on to put Arsenal ahead before Olivier Giroud's close-range finish wrapped up a 13th win in a row in the FA Cup.

Darren Pratley saved bottom-of-the-Championship Bolton when he pounced on a loose ball in the area to equalise three minutes from time.

Eastleigh - the lowest ranked team left in the cup - led through a Dorian Dervite own goal just after half-time.

A crowd of more than 5,000 squeezed into the ground just a short walk from Southampton Airport and almost saw the home side reach the fourth round for the first time in their 70-year history.

Aguero surged past Sebastien Bassong, sidestepped Russell Martin and poked in a shot to put the visitors ahead.

The Argentine striker then teased the home defence before laying the ball off for Kelechi Iheanacho to side-foot in.

Manchester City were dominant and Kevin de Bruyne powered in a low shot for their third goal.

Aston Villa's winless run continued to 16 games as the Premier League's bottom club were held to a draw by League Two Wycombe Wanderers in the FA Cup third round.

Captain Micah Richards gave Villa the lead after 22 minutes with a low right-foot shot but Wycombe, sixth in League Two and FA Cup semi-finalists in 2001, were level five minutes after half-time through Joe Jacobson's penalty.

Wayne Rooney scored a last-minute penalty as a poor Manchester United beat League One Sheffield United to reach the FA Cup fourth round.

The hosts, 47 places above their opponents in the football pyramid, had only two shots on target throughout the match.

Substitute Memphis Depay curled just wide in the second half, but it looked like the visitors would earn a replay.

However, after Memphis was fouled inside the area, Rooney stepped up to score and send the hosts through.

James Morrison struck a late equaliser to save West Bromwich Albion as Bristol City forced a draw at the Hawthorns.

The Premier League side led when Saido Berahino curled the opener within four minutes of coming off the bench.

But Jonathan Kodjia headed the Championship side level, before substitute Kieran Agard tapped in.

They looked set to progress, but Morrison turned in a Jonny Evans knockdown in the fifth added minute.

A history of the FA Cup