'Plot to kidnap one of Obama's dogs' stopped by police 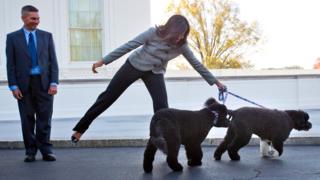 American police have arrested a man who is suspected of trying to kidnap one of US President Obama's two pet dogs.

Officials say Scott Stockert was planning to snatch one of the dogs, either Bo or Sunny.

Mr Stockert has been charged with breaking the District of Columbia's gun laws.

US President Obama hits the dance floor during Kenya trip

Who is US President Barack Obama?