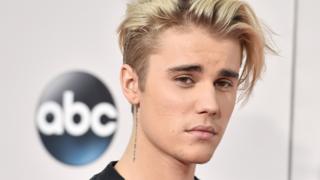 Justin Bieber has achieved another chart record by holding the number one, two and three spots with his songs, which has never been done before.

The Canadian singer remains at the top of this week's singles chart with Love Yourself and also stays put at two with Sorry.

Bieber's former number one track What Do You Mean?, meanwhile, climbs one place to three.

In the album chart, Adele's 25 is number one for a seventh straight week.