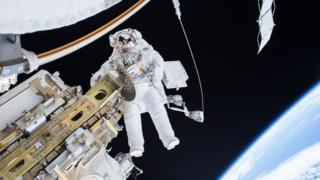 After one month on the International Space Station (ISS), Tim Peake is going to be the first British person ever to do a spacewalk.

That means that he will step outside the ISS, and take a walk in space.

Tim will be joined by his crewmate, Tim Kopra who has done a spacewalk before.

How do you do a spacewalk? 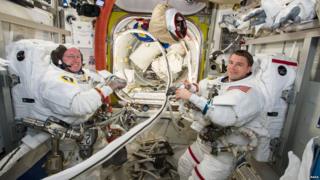 NASA
Astronauts put their suits on several hours before the spacewalk

Before they can go outside the spacecraft, astronauts have to put on a spacesuit to keep them safe.

There's no air in space, so the suits are filled with oxygen for them to breathe.

Once they've got their suits on, the astronauts breathe pure oxygen for a few hours, to get rid of other gases in their bodies which could make them ill in space.

Once they are ready to go, the astronauts go through a special door, into an airlock. 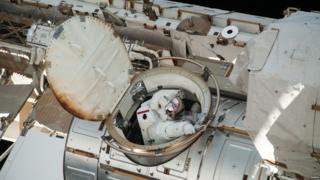 The airlock has two doors. Once they're in it, astronauts lock the first door tightly behind them, so that none of the air in the spacecraft will escape when they open the second door to go outside.

When they are outside, it's really important that they don't float away, so the astronauts use special ropes to keep them tied to the spacecraft.

They also tie all of their tools to their spacesuits so that they don't float away either. 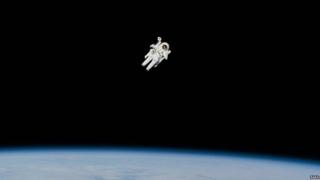 NASA
Bruce McCandless did the first ever spacewalk without being attached to the spacecraft in 1984. He used a jet-propelled backpack to move around instead

In case the rope ever failed, astronauts have got a special backpack with a jet that they can control so that they could fly back to the spacecraft. 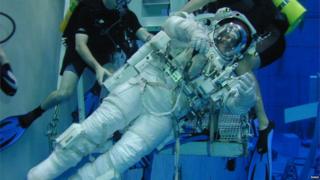 Floating in space is a lot like floating in water, so astronauts practice their spacewalk on earth, in a big swimming pool. For every hour that they'll spend on the spacewalk, they practice for seven hours in the pool.

Astronauts also practice using a virtual reality headset and special gloves. It's a bit like playing a video game that looks and feels just like doing a spacewalk.

Why do astronauts go on spacewalks? 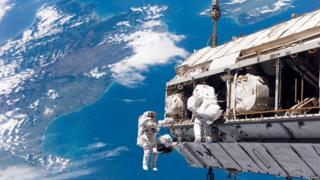 NASA
Astronauts carry out repairs on the outside of their spacecraft

There are lots of reasons for astronauts to go on spacewalks:

Tim Peake and his crewmate Tim Kopra are going to replace a broken bit of equipment called a voltage regulator, to get the ISS back to full power.