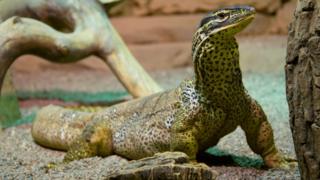 Scientists have worked out a radical solution for Australia's deadly cane toad problem.

They have trained wild monitor lizards, known locally as goannas, not to eat the toxic cane toads.

They did this by feeding the reptiles smaller, younger and less poisonous cane toads. Many that tried the toads once did not make the same mistake again.

The study is published in a Royal Society journal, called Biology Letters.

Lead researcher Georgia Ward-Fear, from the University of Sydney, said: "We've been very surprised by the results, by the amount of time that some of these lizards have actually retained this knowledge and survived in the presence of a high-density of cane toads, which is basically unheard of in the wild." 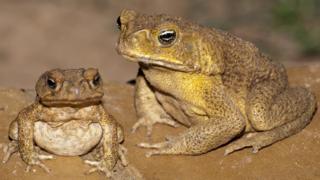 Cane toads were introduced to Australia in the 1930s to control sugar cane pests.

But their numbers have rapidly increased, killing many of the continent's animals, because they are poinonous.

Among the hardest hit are the yellow-spotted monitors (Varanus panoptes). Their population is estimated to have plummeted by 90%.

When the toads invade a new area, these yellow-and-black-spotted reptiles feast on the amphibians, and die.

The scientists say the study suggests goannas have the ability to learn from experience and keep that knowledge over a long period of time.

One of the scientists, Dr Ward-Fear, said: "This study provides the proof of principle that this strategy could be very effective. Employing it in the wild could potentially have a really large positive impact on the goanna population."

How toads could help us predict earthquakes

Extreme heat drives koala to drink from gutter in Australia