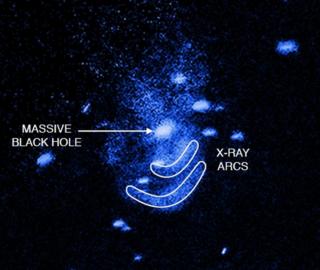 NASA/CXC/Univ of Texas/E Schlegel et al
The two waves of hot, X-ray emitting gas were seen in this image from Chandra

Astronomers have spotted two huge waves of gas being "burped" by the black hole at the heart of a nearby galaxy.

The hot gas, detected in X-ray images from Nasa's Chandra space telescope, appear to be sweeping cooler gas ahead of them.

This huge, rippling belch is taking place in NGC 5194 - a small galaxy, 26 million light years away.

That makes it one of the closest black holes to Earth that is blasting gas in this way.

"We think that feedback keeps galaxies from becoming too large," said Marie Machacek, a co-author of the study from the Harvard-Smithsonian Center for Astrophysics (CFA).

"But at the same time, it can be responsible for how some stars form. This shows that black holes can create, not just destroy."

What do black holes do?

Black holes are well known for eating up gas and stars, but the two arcs of material glimpsed here are a bit like a burp after a big meal, the team said.

The black hole at the centre of NGC 5194 probably gorged on gas from the small galaxy's much bigger, spiralling neighbour.

As that matter fell into the black hole, huge amounts of energy would have been released - causing the outbursts. 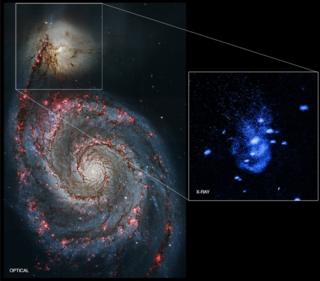 The team has calculated that the inner wave of hot gas probably took three million years to reach its current position - and the outer wave up to six million years. 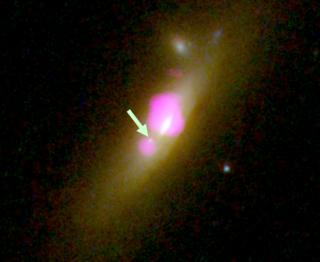