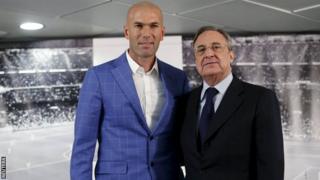 Rafael Benitez has been sacked as manager of Real Madrid after just seven months in charge, with club legend Zinedine Zidane replacing him.

Real B team coach Zidane was promoted to first-team boss after a club meeting on Monday.

Zidane, a former Real Madrid player and World Cup winner, said: "I am going to put my heart and soul into this job so that everything works out well."

Benitez's final game was Sunday's 2-2 draw with Valencia which left them third in La Liga, four points behind leaders Atletico Madrid and two adrift of Barcelona.

Zidane is the 11th coach to be appointed in Florentino Perez's 12 years as club president.

The length of Zidane's contract has not been made public, but his first match in charge will be Saturday's home La Liga game against Deportivo la Coruna.