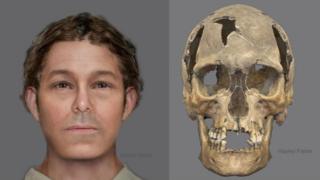 Edinburgh City Council
Experts have imagined what the 'pirate' might have looked like when he was alive.

A skeleton found under the playground of a Scottish school could belong to a 16th century pirate, according to experts.

The skeleton was found by council workers at Victoria Primary School in Edinburgh.

Experts have studied the bones and think that the skeleton is probably more than 400-years-old.

They think that he may have been a pirate because the school where he was discovered is near to a harbour.

Harbours were once places where the bodies of criminals, like pirates, were put on display to warn others against bad behaviour.

Thousands of skeletons removed from beneath London station