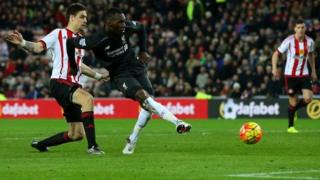 Christian Benteke scored the only goal as Liverpool ended 2015 with a victory, leaving Sunderland in deep trouble.

Benteke netted early in the second half, running on to Adam Lallana's pass to neatly score from inside the area.

Sunderland's Jermain Defoe forced Liverpool keeper Simon Mignolet into an excellent save, but the Black Cats have now lost their past five games.

The win took Liverpool back to seventh place in the Premier League, while Sunderland are second from bottom.

Benteke's goal was the quickest second-half goal scored in the Premier League this season (22 seconds).

Liverpool have won five games 1-0 this season, a Premier League joint-high along with West Bromwich Albion.

Sunderland have taken just two points from their past seven Premier League meetings with Liverpool.

The Black Cats are now on their worst run of Premier League defeats since April 2014.

Reuters
Liverpool's Emre Can (centre) made two tackles and two clearances, as well as winning the ball back seven times. His tally of 64 passes was more than any other player on the pitch
What's next?

Sunderland host bottom side Aston Villa on Saturday at 3pm, while Liverpool travel to West Ham on the same day for a 12.45pm kick off.

Arsenal: Arsene Wenger 'will be busy' in January