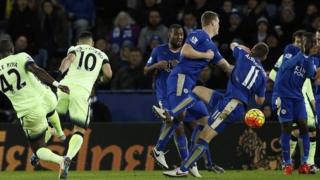 Leicester City missed the chance to return to the top of the Premier League as they played out a goalless draw with Manchester City at the King Power Stadium.

Both sides had chances in an entertaining match, with goalkeepers Kasper Schmeichel and Joe Hart excelling with a number of saves.

Jamie Vardy missed Leicester's best chance when he shot over the crossbar in the first half while the Man City's Sergio Aguero missed a couple of shots too as both sides pushed for the win.

Manchester City have continued their winless run on the road in the Premier League to six games, something they last achieved in April 2011.

Pellegrini's side have scored just one goal in their last five Premier League away games.

Leicester City failed to score at home in the Premier League for the first time in 15 games.

Manchester City kept their first clean sheet of the season without Vincent Kompany in the line-up.

Leicester host Bournemouth on Saturday, while Manchester City play the first of seven games they have in January by travelling to Watford for a 5.30pm kick-off.