Hundreds of homes have been evacuated and thousands left without power in Scotland and Northern Ireland, as Storm Frank brings heavy rain and strong winds with speeds of up to 80 miles per hour.

There are three severe flood warnings, meaning "danger to life", in Croston, Lancashire, where villagers are prepared for the second flood in a week.

Another 46 flood warnings are in force in England and Wales and more than 60 in Scotland. 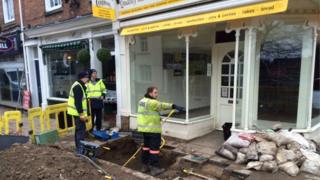 Scotland, Northern Ireland and the north of England are expected to face the worst weather.

In Northern Ireland, about 20,000 homes and businesses lost power overnight, air passengers were delayed and fallen trees caused problems on the roads.

Meanwhile in North Yorkshire, soldiers evacuated homes near a bridge in Tadcaster after it collapsed, creating fears of flooding and a possible gas explosion.

In Scotland, fire crews are trying to reach 30 properties in the cut-off village of Carsphairn in Dumfries and Galloway by boat.

In Wales, almost 900 properties in Carmarthenshire, Pembrokeshire, Swansea and a handful in Ceredigion lost power.

December 2015 has been the wettest on record for parts of the UK and has seen several communities swamped by rising waters.

The heaviest fell in Capel Curig in Wales, which had 100 centimetres of rain, well over an average December of 30 centimetres.

BBC Weather's Matt Taylor said between 8 and 12 centimetres of rain was expected over Cumbria and central and southern Scotland, with rivers in Dumfries and Galloway likely to rise.

Scottish coasts were experiencing gusts of up to 70 miles per hour, he said. 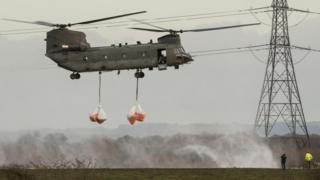 On Tuesday, Greg Clark, the government minister in charge of communities, announced £50 million extra funding to help households and businesses affected by flooding in northern England. The government says it has now promised more than £100 million towards the crisis.