A fresh storm threatens to bring more flooding to parts of the UK.

Storm Frank is due to sweep in from Tuesday evening, with Cumbria and south and central Scotland at most risk. 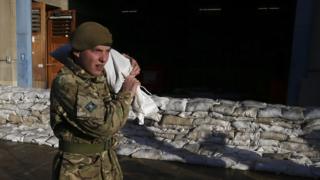 There are already nine severe flood warnings - meaning "danger to life" - in England and Wales, mostly around York which was flooded on Saturday.

There are also yellow weather warnings - meaning "be aware" - for rain for the rest of Scotland, Northern Ireland, Wales, North East England and Yorkshire and Humber.

Floods minister Rory Stewart told the BBC that the government would spend £2.3 billion on flood defences over six years.

"We have to try to be fair, we're putting a lot of money into this and we're making sure we're spending it in the most cost effective way we can."

The government has ordered a major inspection into how it is planning to prevent floods in the future. 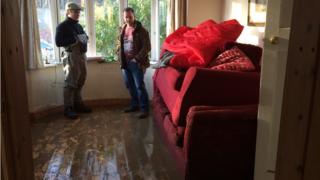 But the Labour Party's John McDonnell said that "a long term cross-party plan" was needed to help solve the issue of flooding and any review must include the views of experts on the ground.

Liberal Democrat party leader Tim Farron said extra funding was needed for flood defences, and said Prime Minister David Cameron needed to "show he cares about the North by following up his words with deeds".

Experts estimate the damage caused by flooding across northern England could cost more than £1.5 billion.

People in Cumbria are cleaning up again after more floods