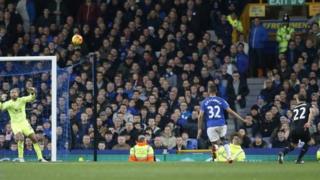 Sixteen teams were back in Premier League football action on Monday.

Super goals, last minute winners and red cards - the matches had it all.

Find out what happened right here with Newsround's round-up.

Xherdan Shaqiri scored one of the goals of the season as Stoke earned a thrilling win at Everton through Marko Arnautovic's injury-time penalty.

The Potters led through Shaqiri early on and after Everton's Romelu Lukaku equalised, Shaqiri looped a stunning half-volley over goalkeeper Tim Howard.

Lukaku struck again after the break and Gerard Deulofeu tapped Everton ahead.

But Joselu volleyed his first Premier League goal and Arnautovic won it for Stoke after being brought down in the penalty box by John Stones. 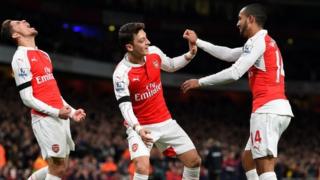 Mesut Ozil inspired Arsenal to retake top spot in the Premier League, at least for 24 hours, as they won their first league meeting with Bournemouth.

After a nervy opening, Ozil's corner was met with a strong header by defender Gabriel for his first goal in English football.

Ozil made it 2-0 after the break from a slick one-two with Olivier Giroud.

Getty Images
Mesut Ozil was at the heart of everything Arsenal did well, not just setting up the first goal and scoring the second but also tackling back to rescue right-back Hector Bellerin at one stage.

Bournemouth showed plenty of spirit, but could not find their way through as Arsenal closed out the victory.

With Leicester not playing until Tuesday, Arsenal leapfrog them into top spot by one point.

Son Heung-Min scored a dramatic late winner as Tottenham moved up to third in the Premier League with victory over 10-man Watford.

Erik Lamela put the visitors in front when he stroked in a shot after Watford's Craig Cathcart lost the ball.

Odion Ighalo equalised after getting past Spurs defender Eric Dier to poke home.

Watford's Nathan Ake was sent off in the second-half before Son scored with a clever flick from Kieran Trippier's cross. 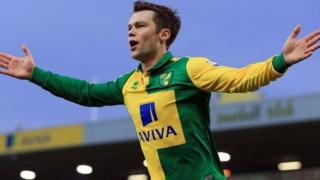 Norwich lifted themselves away from the Premier League relegation zone with a nervy win that leaves rock-bottom Aston Villa further away from safety.

In a game without much quality, Jonny Howson's strike at the far post separated the sides for over an hour.

Norwich made sure they moved three points clear of the bottom three when Dieumerci Mbokani powerfully headed in.

Villa did not do enough to avoid falling 11 points from safety with 19 games remaining.

Manchester United provided some relief for manager Louis van Gaal with a much-improved performance as they were held to a draw by Chelsea at Old Trafford.

Van Gaal is under pressure after a run of four straight defeats - and while a draw stopped the losing streak, United are still without a win in eight matches in all competitions.

United's luck was out as both Juan Mata and Anthony Martial struck the woodwork inside the first 15 minutes and only a brilliant save from Chelsea keeper Thibaut Courtois stopped Ander Herrera's shot after the break.

Chelsea had chances of their own and United needed the brilliance of keeper David de Gea as he saved from John Terry's early header then made a double save from Pedro and Cesar Azpilicueta in the second-half.

Nemanja Matic missed the best chance of the game when he raced clear of United's defence, only to shoot hopelessly over the crossbar. 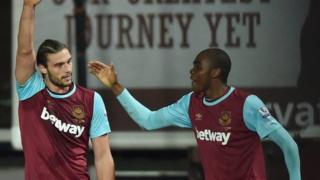 Andy Carroll came on to score the winner as West Ham recorded their first Premier League victory in two months by fighting back to beat Southampton.

Saints dominated the first half and went ahead when Dusan Tadic's effort deflected in off Carl Jenkinson.

Michail Antonio levelled for West Ham, before Carroll headed in from close range to win the match.

West Brom enjoyed their first league win in six games to ease their relegation fears but added to Newcastle's worries at the bottom of the table.

Both teams hit the crossbar, with Paul Dummett's header going close for Newcastle and Victor Anichebe going nearly scoring for the hosts.

Just as the match looked like ending in a draw, Darren Fletcher timed his run perfectly to head home Claudio Yacob's cross for West Brom.

Crystal Palace's push towards the Premier League's top four hit a bump as Swansea ground out a point at Selhurst Park.

Swans caretaker boss Alan Curtis saw his side get a third clean sheet in a row to remain above the bottom three.

Gylfi Sigurdsson almost won it for Swansea, but his free-kick was saved.