Paralympic sports: Ones to watch for 2016 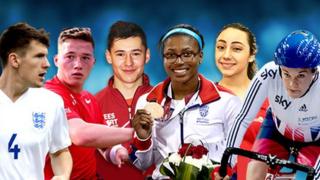 The Rio Paralympic Games are fast approaching and Britain's top disabled athletes are hoping that the coming year can bring success.

The Games, which run from 7-18 September, will see around 4,350 athletes from more than 160 countries travel to Rio, Brazil, to compete in 526 medal events in 22 different sports.

Britain enjoyed a hugely successful London Paralympics in 2012, winning 120 medals, including 34 golds, to finish third on the medal table behind China and Russia.

With a team of more than 200 expected to be named for the Games, here's a look at some of the Paralympic athletes hoping to make an impact in 2016 on the biggest stage of all.

Despite being only 17, Moore has been playing wheelchair basketball for eight years and is now a key part of the GB women's squad who will be playing at next year's Rio Paralympics.

Charlotte has a busy life, combining her first year of A Level study in Biology, Chemistry and PE with training alongside the rest of the GB players who are based at the University of Worcester.

The teenager, who is paralysed from the waist down, enjoyed double medal success in 2015, first helping the GB Under-25 Women to the world title before securing bronze at the European Championships.

"Having so many others on the team around the same age as me has been really good," she said.

"I would love to be selected to Rio and try and put in the same sort of performance that I did at the Europeans but under that bit more pressure."

In January 2013 the then 27-year-old Giglia was working as fitness coach when she suffered a stroke which left her with restricted movement down her right side.

Keen to get back into sport, cycling formed part of her recovery and after being spotted by British Cycling, she joined their development programme in 2014.

She made her major international debut in 2015, racing in both the World Track and World Road Championships, and finished the year on a high at the Manchester Para-Cycling event, winning a gold in the C3 pursuit race.

"At the moment, I don't allow myself to think too much about Rio because you never know what is going to happen" said Giglia.

"I never dreamed I would get to this level but it has allowed me to turn what was a bad situation into a good one. It gives me something to live for and I hope what I am doing can give other people hope that that can do something with their lives."

The Norwich teenager is Britain's top ranked junior and is hoping to make his Paralympic debut in Rio at the age of 18.

Hewett was born with a heart problem, which required surgery when he was six months old, and then aged seven he was diagnosed with a condition called Perthes Disease, which affects his hip joint.

Hewett's 2015 saw him make his debut in the Wimbledon wheelchair doubles event in July and also win singles titles in Berlin and Italy and the British Open doubles title.

"It has definitely been a roller-coaster year," he said. "I had some good wins over top 10 players but also some sloppy performances so there is a lot to take out of it for next year.

"Getting to Rio would mean a lot. I've had to overcome a lot but this has been my goal and it would prove that all the hard work and the sacrifices my family and I have made were worth it and a medal would be a dream come true."

Having won team bronze at London 2012, Wilson wants to add an individual medal to that if he is selected for Rio.

The 20-year-old was the youngest member of the GB table tennis squad in London, missing out on a medal in the singles before linking up with Will Bayley and Aaron McKibbin for the team event.

Wilson, who has a condition which affects the growing ends of the bones, is expecting to find out whether he has been selected for Rio early in 2016.

He said: "After London, I suffered with a shoulder injury, and that meant a lot of rehabilitation. I also had knee and shoulder operations, so it has required a lot of patience and a lot of waiting around."

"That has helped me improve in the gym and improve psychologically and everything is coming together now."

Having been left out from participating in sports at school for health and safety reasons, the Games made her realise that she could take part in sport, despite her cerebral palsy, and she quickly discovered that there was an athletics club in her city.

In October, aged 14, she was the youngest member of the GB team at the IPC Athletics World Championships in Doha, winning two bronze medals.

"The World Championships were a stepping stone and I learned a lot about technique and tactics which should be beneficial for future competitions. The thought that I might be competing at Rio Paralympics is extremely exciting" says Adenegan.

He may only have made his England debut a few months ago, but Crossen is already targeting gold with Great Britain at the Rio Paralympics.

The 25-year-old defender, from Stockton-on-Tees, impressed in June as England finished fifth at the Cerebral Palsy World Championships, their best ever, to secure a place for GB in Brazil.

He admits he almost gave up football "10 times" after a stroke at the age of 22 left him with restricted movement on his left side.

Crossen said: "I am going for gold. Definitely a medal is the aim going into it. I am not going there to be a tourist, I am going for a medal.

"I would say we have got the third-best team in the world. I know the rankings don't say that but I think we could beat anyone on our day."

Jonnie Peacock: 'You must make sacrifices to reach the top'

The day I got the chance to meet my Commonwealth hero

'Not enough clubs for kids with disabilities'