Crows are well known for their clever tricks but now they have been caught on camera making and using hook like tools.

Ecologists fitted special tiny tail cameras that can see beneath the birds' bellies to see how the wild New Caledonian crows behave.

As well as glimpsing two crows making special foraging hooks, the team was able to track their activity over time.

Christian Rutz, from the University of St Andrews in the UK said: "Why is it that New Caledonian crows use tools but other birds don't? I think the answer lies in figuring out how important tool use is in their everyday lives.''

In nearly 12 hours of "crow cam" footage from 10 different birds, the team diddn't get much footage of the birds making and using the tools.

"Out of total observation time, only about 3% was spent making or using tools," Dr Rutz said. And only four of the 10 picked up a tool at all. 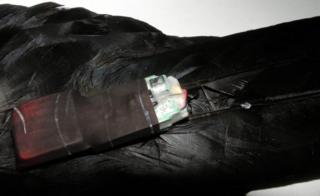 Jolyon Troscianko
Each camera was attached to the tail feathers, looking forward under the crow's belly

The crows spent most of their time looking for food with their beaks.

The birds spent a lot of time tearing strips from paperbark trees in search of grubs. Their sturdy beaks are perfectly good for this job.

"But every now and then, they suddenly switch to tool use - in the very same trees.'' Dr Rutz said. "We don't understand what is happening there."

But they caught two different crows, not just using sticks but making - and using - hooks.

"When we got that footage it was a proper high-five moment in the field camp," Dr Rutz said. 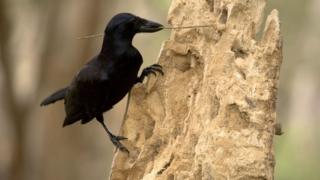 From lab experiments and sightings through binoculars, the team knew that the birds made these hooks.

They snap off one branch from a forked twig and leave a small part of the main stem attached to the end.

But now, for the first time, they have video evidence of it happening, unprompted, in the wild.

Jolyon Troscianko from the University of Exeter said: "New Caledonian crows are notoriously difficult to observe, not just because of the challenging terrain of their tropical habitats, but also because they can be quite sensitive to disturbance."

The crow cams have been given a new design to make recording easier.

Instead of beaming the video to a receiver which meant researchers had to scramble through the New Caledonian forest with antennas, these new devices stored the footage on a micro SD card. 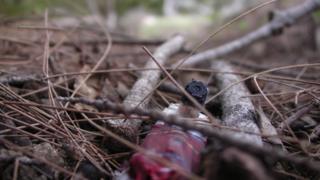 They're full after about a week, and the gadgets fall off the birds.

The team tracked them down thanks to a tiny radio beacon.

"We got much longer, uninterrupted video recordings," Dr Rutz said.