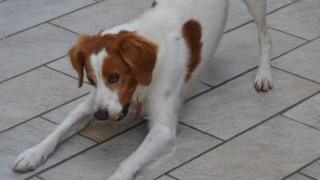 When dogs meet they can copy each other's expressions in a split-second just like people.

Italian researchers at the Natural History Museum, University of Pisa, say mimicking each other's facial expressions is a human habit, which helps people to get along better.

Dogs do the same to bond with other dogs.

They think dogs started doing this as they moved from being wild to being kept as pets in people's homes.

Until now, the idea - of social bonding - has only been found in humans, chimps and orangutans.

It's why humans mirror a smile or a laugh, and they can share emotions. 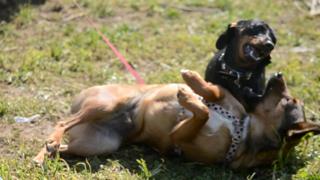 Lead researcher Dr Elisabetta Palagi says dogs can instantly pick up on the emotions of other dogs through their facial expressions and body movements.

The team videotaped dogs playing in a park in Palermo, Italy.

They looked at the ways the dogs behaved including signals that show when a dog was being playful:

After looking at 50 hours of video, they found that dogs could mirror the facial expressions and movements of other dogs in a split-second.

This is an automatic and involuntary response, not because of training.

Meet Kai the abandoned dog and his new owner

Surf dogs take to the waves in California